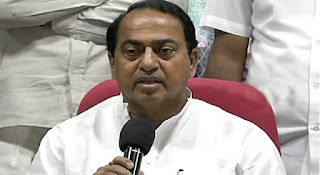 Hyderabad: Praising Chief Minister K Chandrashekar Rao for establishing a good tradition for holding World Telugu Congress (WTC), Minister for Endowments and Law A Indrakaran Reddy said that the global language conference is a historical moment to reckon with.
Attending as a chief guest to a session on ‘Sathaka, Sankirthana, Geya Sahithyam’ held at Potti Sriramulu Telugu University (PSTU), here on Monday, the Minister said that people from different parts of the country and from abroad have attended the WTC in a big way, making it a historical event in Telangana.
The Minister facilitated famous poet Dr J Bapu Reddy and educationalist Dr Velichala Kondala Rao during the occasion. Prof Kasireddy Venkata Reddy, who presided over the session, said that the state is a treasure trove in all the three genres in the Telugu language and literature.